Verso the print reads: ‘Names of the 2008 student-earthquake-victims researched by Ai Weiwei Studio, Courtesy of the artist’. At the lower part of the print a sequence of numbers is printed.

Ai Weiwei is well known for criticizing governmental behaviour of the People’s Republic of China, although he has no problems with giving the White House the finger. Having spent his younger years in New York in the 1980s, when conceptual and performance art were dominant and while Warhol was active, he has learnt how to combine his own life and art into a daring and often politically charged performance that helps to define how we should see China of today. Ai Weiwei has been harassed and jailed for his continually calls to account of the Chinese governmental attitude.

The print ‘Namelist’ (2008-2011) includes names of the more than 5,000 schoolchildren who died during the Sichuan earthquake of 2008 due to a disproportionate number of collapses of shoddy schoolhouse constructions. Chinese authorities systematically neglected the deaths and its causes. The disaster was twisted. Therefore Ai Weiwei began to straighten out the record. Bad construction had contributed to the disaster and officials were very keen to suppress evidence of corruption. The factual number of victims was difficult to find out, until Weiwei and his helpers made the count, name by name. The students are memorialized at various exhibition venues and moments like here in the edition “Namelist”.

During the time Ai Weiwei was being withheld by the Chinese government, a period in which he was unable to travel and his passport having been taken in, he placed a fresh bouquet in the basket of a bicycle outside his studio each morning. His #aiflowers Instagram up loads invited people everywhere to make flowers to remember the very young students lost in the 2008 Sichuan earthquake.

Ai Weiwei: “Once we find the names and numbers, I think a scientific study should be done to study how the schools collapsed and how the students died,” says Ai. “If anybody tries to hide it, it is a crime to the people and the nation. This time I don’t think anybody can let it go.” 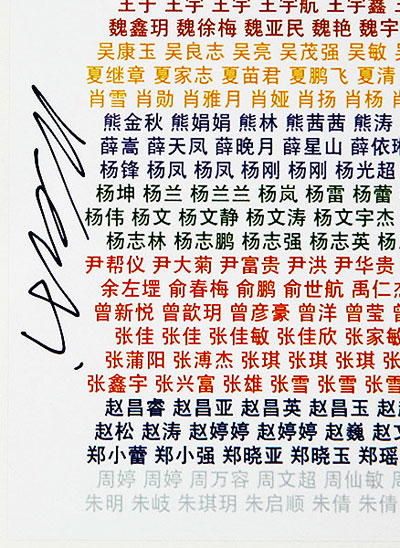