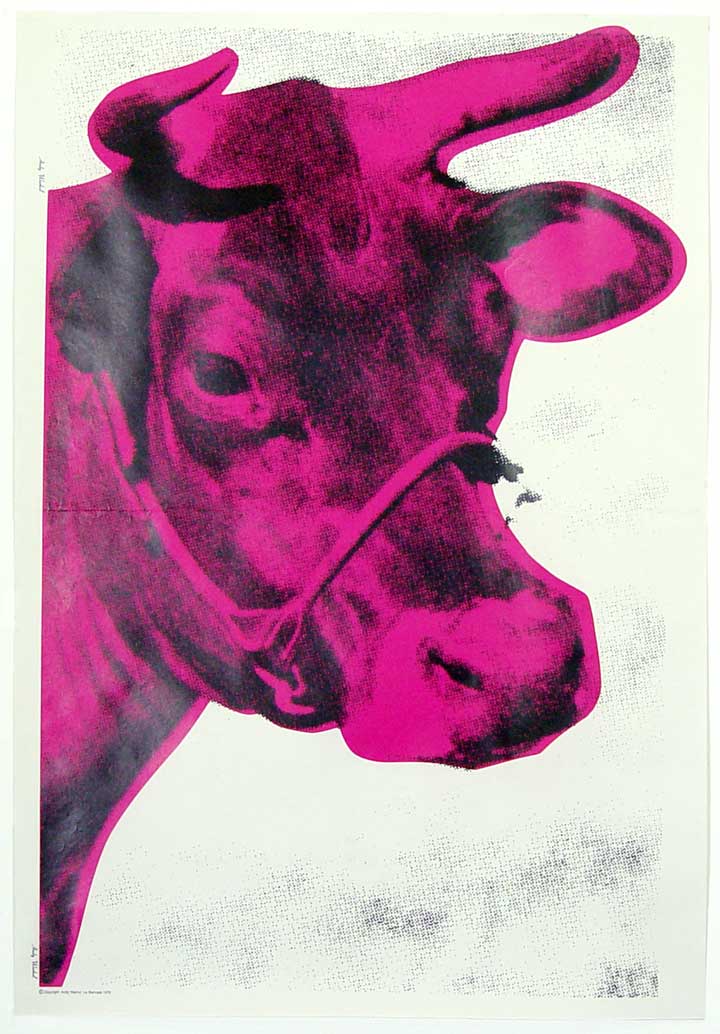 This screen print comes with a certificate of authenticity stating that the provenance is from a collection of a neighbour of Andy Warhol. See at The Archive is Limited: “Cow” (black and white) and “Mao” (2 heads, black and white) that were also part of this collection.

Condition details.
The left top corner of this print has a light dog ear, the right top corner has some flattened crumpling lines and the middle part has a horizontal bending. Small tear on 1 cm at the top side. Overall the print looks very good and no discouloring of neither paper nor ink layer. An attractive lived-through print!

Basically there are two kinds of so called Cow prints, with various widths. One print run was made in 1966 with a text TRIM Andy Warhol and another one in 1976. In 1966 Andy Warhol produced Cow prints for his exhibition at Gallery Leo Castelli. For the Venice Biennale 1976 he showed Cow wall paper specifically produced for his presentation at the pavilion of the USA. In the latter case on the brim of each sheet of paper a text was added: Copyright Andy Warhol La Biennale 1976.

Extra information about ‘Cow’ prints, 1966-1976
– wallpaper print
Art dealer Ivan Karp proposed Andy Warhol to paint some cows after he claimed that traditional painting was “dead”. Printer Gerard Malanga subsequently came up with some photographs of a cow’s head which were shown to Warhol. This resulted in a series of cow prints, all screen printed on wallpaper between 1966 – 1976.
The iconic Warhol’s print of a cow was first executed in 1966 for his exhibition at the Leo Castelli Gallery, New York: ‘The idea to use a picture of a cow’s head reportedly stemmed from a comment by the dealer Ivan Karp that no one painted pastoral scenes any more. Warhol’s response was to find a picture of a cow in an old agricultural magazine and have it silkscreened as wallpaper’. Source: TATE Modern, London, UK.

The first of the series, Cow, 1966, was published as a wallpaper for an exhibition at the Leo Castelli Gallery. Repeated imagery of cows on the wall surrounded visitors.
The second screen print of the series features an orange cow against a lilac background. This image was published for a 1971 Warhol exhibition at the Whitney Museum in New York.
The third screen print shows a cow that is coloured in bright yellow against a blue background. Of this work 150 copies have been hand signed. The unsigned versions have been authenticated by the Andy Warhol Art Authentication Board.
The last screen print of the series shows the cow in light pink against a purple background. This work was published for an exhibition at the Modern Art Pavilion in Seattle, Washington, from November, 1976-January 9, 1977. Prints in various colours have been signed in an unknown edition.

For some reason there is a fifth series of various colour combinations made in 1976, apparently during the time when the fourth series was produced. Several copies have been signed by the artist. See image below. 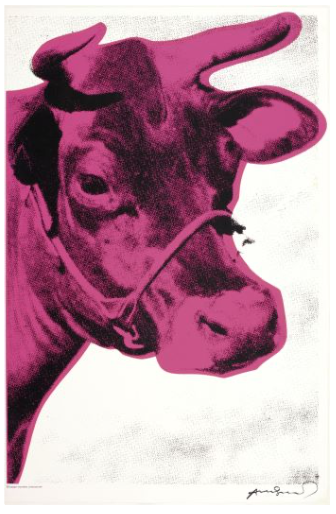