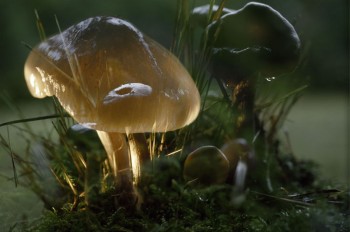 Untitled (Mushroom) is taken from a series of photographs of ferns, fungi, flowers, insects, grasses and undergrowth. Each photograph is a double exposure, made by either Peter Fischli or David Weiss taking pictures and then handing the camera over to the other, or maybe not, rewinding the film, and shooting again on the same roll of film. The result is a kaleidoscopic world of double-vision. A kind of what they called “concentrated daydreaming”—real-time glimpses into daily life in Zurich: a mountain sunrise, a restaurant chef in his kitchen, sanitation workers, a bicycle race, and so here mushrooms in nature.