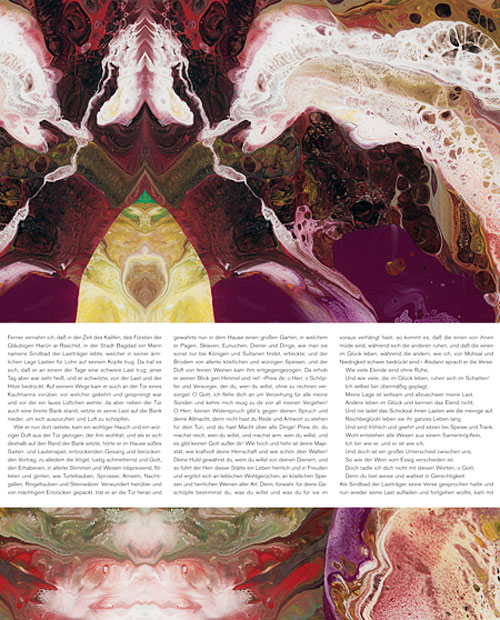 Originally “Sindbad” is the title of a series of 98 pictures, painted on the back of panes of glass in 30 x 24 cm format, from 2008. In their first exhibition, Richter paired them as diptychs, like 49 double pages.

The concept of this book was already clear at the time of their painting. Richter decided to reproduce all of the pictures in original format, cut over three pages, leaving a bar of two centimetres blank at the binding. This gives the book its form. The seven texts about ‘Sinbad the Sailor’, each set in three columns over double pages, give structure to the extensive, “fairytale” series. The banderole around the book contains an introduction to the journey. Every detail – paper, typography, layout and flow of the book – was decided by the artist. “Sinbad” (in German “Sindbad”) is without doubt a further highlight in Gerhard Richter’s series of artist’s books.

Sindbad is the title of a series of 98 lacquer pictures made in 2008, painted on the back of 12 x 10-inch panes of glass. For their first public exhibition, Richter paired them as 49 diptychs, which resembled 49 book-page spreads, pointing towards the possible ideal incarnation of these works as a large-format artist’s book. Using silkscreen printing, this volume reproduces all 98 of the pictures at their original dimensions. Seven texts, on the theme of Sinbad the Sailor (in German only), are interleaved with these magnificent images, and a bellyband around the book offers a concise introduction to the work. 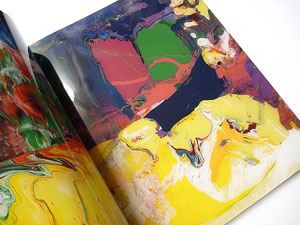