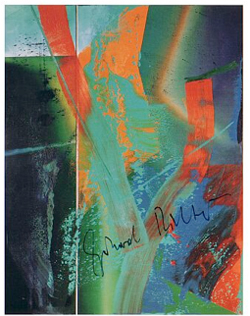 “This work is part of an extensive unique collection of catalogue pages and various printed matter signed by Gerhard Richter. The way the signatures are placed on the reproductions create a distance and deconstruction of the illusion of the image. A phenomenon that is very similar to the signed Goslar Kerze poster of 1988. His signature positioned straight on top of the image as an ultra short painter’s gesture – opposite to the hard labour of his elaborate swept paintings – high lightens the gap between the reproduced and the uniqueness of each handwriting apparently integrated in the image.

One of the most important characteristics is the way the artist creates a distance between emotions possibly aroused by an image and the way a painting is blurr painted. Or in this case is reproduced and then disturbed by the gesture of a hand writing. The question about what the reproduced represents is put aside or at least put on hold by showing us two separate moments of two different ‘images’. This is opposite to what Roland Barthes called “punktum”. The depicted arouses direct emotions of recognition or disgust, caused by a meaning that pops up before we realize this. Nothing is in the way and these meanings suddenly appear to come out of the photo, id est here out of  the abstract picture. This is in contrast to what Barthes calls the ‘studium’, which refers to the longing of a search of meanings in a picture. In fact it is ajourning the pass of a judgement on what is seen until the addition sum is made. In his catalogue pages, each signed on loose prints, the two never seem to come together due to the different levels and meaning of each ‘image’. The abstract painting here reproduced in print never reconciles with the image of authorization a signiture stands for. The viewer has to look to the dimension of the reproduced being confronted again and again with the un-pictorial “standard sweep curtain” of Richter’s signature.” Kees van Gelder, October 2006