In March 1995 John M Armleder took part in a group exhibition The-repitition-that-is-a-repitition at Galerie van Gelder. For the first time ‘Olivier’s rejects’ were shown on a single needle; both clumsy and touching left-overs of a series of elemental forms in print of Olivier Mosset. “I was in Olivier’s atelier and I saw some interesting pieces of paper lying against a paper basket, obviously meant for throwing it away. I asked if I could get these left-overs of his print and cutting out session. That was no problem, but later on he discovered that I re-used his waste. He was a bit jealous when he saw the results, I think…… Well, anyway you should not tell him this.”

Many years later I read a text by Willy Parker in a newsletter (posted 13 March 2009) of Minus Plus, New York, USA, with a quote of John M Armleder: “I believe the work that is considered to be mine is someone else’s…anybody’s… the whole world. My work is a cultural event, an inevitable event. If all artists were to disappear, art would be produced by others with a different understanding, different means and different materials. As an individual, an artist simply fills a void. He is the means to an end, so that this arrangement, this accumulation of events can be organized.” Further in the article Parker gives a version on ‘Olivier’s rejects’ and states: ‘… and in 1994, unless we are mistaken, Olivier Mosset gave John Armleder a number of aquatints he considered to be inadequate (thinking that Armleder would doubtlessly use these for packaging materials or something of this nature), and then Armleder published them under the title Olivier’s Rejects. I don’t think it was a matter on inadequacy, but much more about the playful eye and mind of John…… and the ‘why not’ attitude of Olivier. KvG 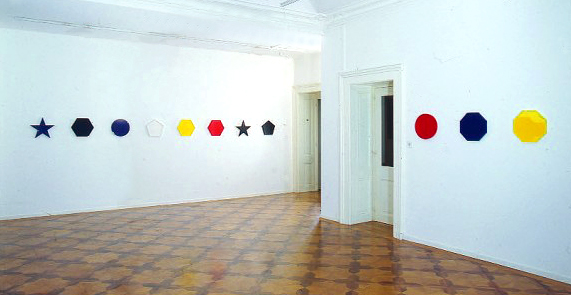