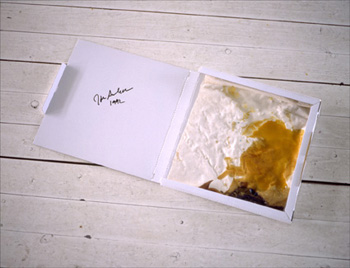 * This is a series of unique ‘Drop cloths’ John Armleder has made on cotton. While preparing his solo exhibition in the Centraal Museum Utrecht in 1992 creating a large three panel ‘Pour Painting’ of 3 x 6 meters. After having finished the huge painting the poured over piece of cotton was one big left-over, which was eventually cut into 105 pieces, still wet and very smelly. The 106th piece appeared to be a real left-over as it is shaped in the form of a very long stretched out triangle. The artist folded this one zigzagging into the last pizza box. The code ‘U 40′ refers to the forty paintings he showed in the museum. On the pizza box is a large red sticker ‘U 40 Drop Cloth’ with artist’ name and date. All are signed on the inside of the box. Some of the works are signed on the cloth itself as well as on the box. The edition has not been numbered.
Note: in 1993 the Wiener Secession in Vienna produced a second drop cloth edition, smaller in size
and on coloured fabric with a label on the inside of each pizza box.