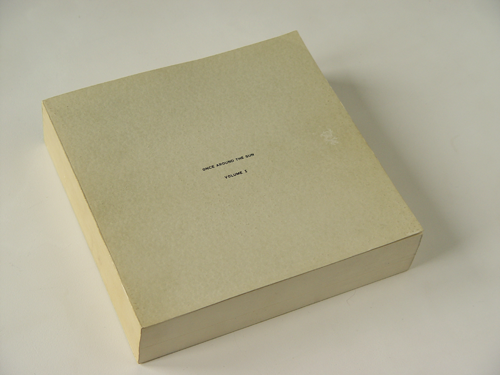 This book is a by Kristjan Gudmundsson hand made object while he was living in Daniel Stalpertstraat, Amsterdam during the seventies. The book object contains hundreds of full stops on each page and is three times thicker than the reprinted version by Ottenhausen Verlag in 1982. The front page states that each point is equal to a second. All points together represent the amount of seconds it takes for the earth to once orbit around the sun. In 1976 the artist made volume II making use of the notion ‘space’ using lines instead of full stops to visualize the orbit of the earth around the sun in length.

The production of this self published book by Silver Press – owned by the artist – was very laborious and no more than circa 8 copies were made. In 1982 Ottenhausen Verlag in Aachen / Munich, Germany, took over the project and published 100 copies which were less voluminous than the original book object hand made by the artist. With the reprint the width of the spine of each volume is shrunken to almost half of its size, making the work less sculptural than the original.