‘Ab ovo’ (Latin: “from the origin, the egg”) is a reference to one of the twin eggs from which Helen of Troy was born. The eggs were laid by Leda after mating with Zeus disguised as a swan. As a metaphor the words refer to the beginning of something ominous; had Leda not lain the egg, Helen would not have been born, so Paris could not have eloped with her, so there would have been no Trojan War. This expression is distinct from the longer phrase ‘ab ovo usque ad mala’ (Latin: “from the egg to the apples”) which appears in Horace’s Satire 1.3. It refers to the course of a Roman meal, which often began with eggs and ended with fruit. Here obviously Lawrence Weiner understood the Latin phrase as the similar American English phrase ‘from soup to nuts’. 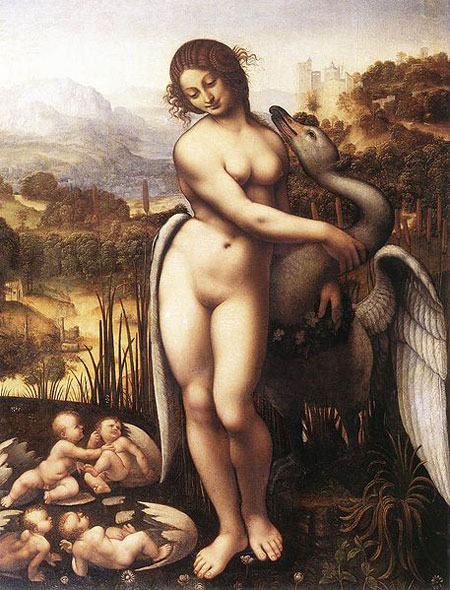 CESARE DA SESTO, Leda and the Swan, ca 1506-1510
In ‘Leda and the Swan’ Helen’s birth is depicted, painted after a lost painting by Leonardo da Vinci. Helen and Clytemnestra are shown emerging from one egg, Castor and Pollux from another.