The first sketch of ‘Hirt’, a so-called mutant, was quickly out of sight when it was bought by a Swiss collector during a New York show. Later on, while making a second sketch of this mutant ‘Hirt’ Neo Rauch came up with the idea to create his Deerdog as a light object coming fully to life in the dark when switched on. 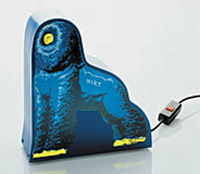 The light object itself.