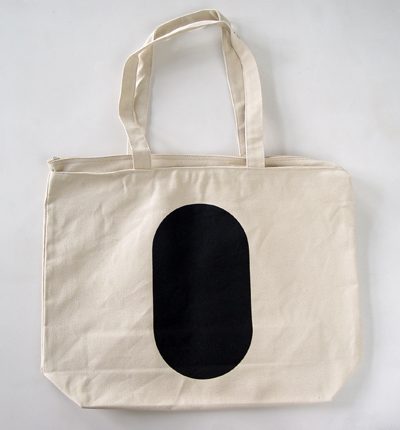 Richard Artschwager (1923 – 2013) first created his blps, pronounced as “blips” in the late 1960s. These installed black pill shaped forms or marks were meant to inspire focused looking and draw our attention to the places and things around us that often go unnoticed. Artschwager’s blp began in 1963, in one of his notebooks. looking for a “very hard, dense, heavy after-image” as stated in Artschwager’s notebook, 12/23/1963. From 1968 and for years afterwards, the blp would appear on power plants and museum walls. Tamed to paper, the blp continued to have a life of its own. It was occasionally fuzzy and often rubbery. Acting as a non-container, the blp’s are to interrupt by draw our attention to the places and things.
This remarkable canvas Blp-bag was produced during the artist’s life time and has also a matte rubberlike outlook.