The work of Yann Sérandour is similar to the work of a historian: using artifacts borrowed from his predecessors, potential accidents and chances, he leads investigations and indexes missing pieces, in order to prolong and cast doubt on histories. He shapes works, often in the form of publications and printed matter, that aim to alter the meaning of a number of historical artworks in such a way that could be described as form of footnoting. Standing in line with this strategy, “L’Espace, lui-même” takes as its starting point a newspaper produced and edited by Yves Klein on Sunday 27th November 1960 and which focused on that day in particular. Overlooked by many was a small portion of the front page divested of anything visually recognisable, which Klein described as a representation of the space itself. It is Klein’s abstraction that Sérandour draws his attention to, vastly increasing its size and thus opening it out to new questions and further equivocal scrutiny and speculation. 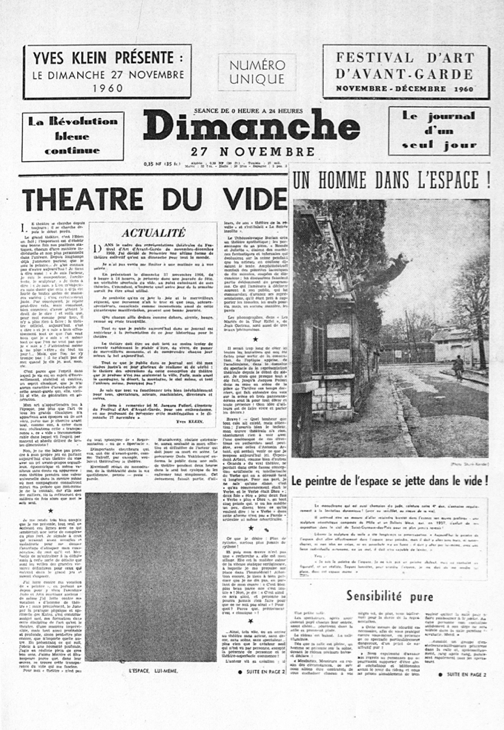 YVES KLEIN, Dimanche 27 November – Le journal d’un seul jour, 1960
55,5 x 38 cm
letterpress on news print paper
edition unknown
For the “Festival d’Art d’Avant-garde” Yves Klein’s October 1960 had his work “Leap Into the Void” for the first printed in the artists’ single day newspaper Dimanche, which was sold at newstands throughout Paris on Sunday the 27th of November 1960, and often appeared side by side with the real French newspaper Le journal du Dimanche. On the same day Klein held a press conference at the Galerie Rive Driote at 11 am, to announce the project. The four page broadside featured visual works and writings by Klein, including the manifesto Theatre of the Void.