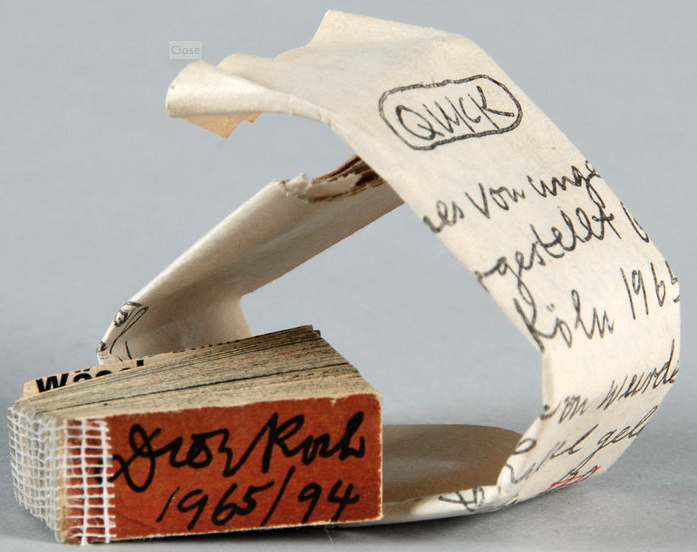 Artist book originally published by Rudolf Reiser in 1965 in an edition 150. In 1994 Rudolf Zwirner / Galerie Rudolf Zwirner in Cologne found one day a shoe box in his storage with left-overs of the edition. He asked Walter Koenig / Buchhandlung Walther Koenig if he was interested in these books. The latter contacted the artist who suggested that he could take the shoe box with the books to Boekie Woekie artist’s Bookshop in Amsterdam for a revival of this project started in 1965. Dieter Roth wanted to have a little container for the book, which was supplied by the bookshop. In this way the remaining 105 copies which remained unsold, were re-issued in Amsterdam in 1994, signed and dated ‘1965/94’ by Roth on the front cover, supplied with a wrap-around information sheet (apart from Dutch text, with stenciled handwriting of the artist) in Icelandic, German (recto), English and Dutch (verso); together with a small plastic box.

The artistic practice of Dieter Roth (Swiss, born in Germany, 1930–1998) encompassed everything from painting and sculpture to film and video, but it is arguably through his editioned works—prints, books, and multiples—that he made his most radical contributions. These experiments include the use of organic materials in lieu of traditional mediums, including book-sausages filled with ground paper in place of meat, and multiples of plastic toys mired in melted chocolate, as well as a dazzling array of variations on printed postcards. Here the magazine Quick was cut and used to the smallest book he ever made. 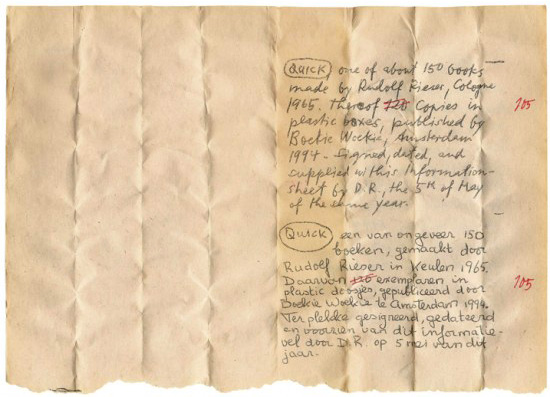