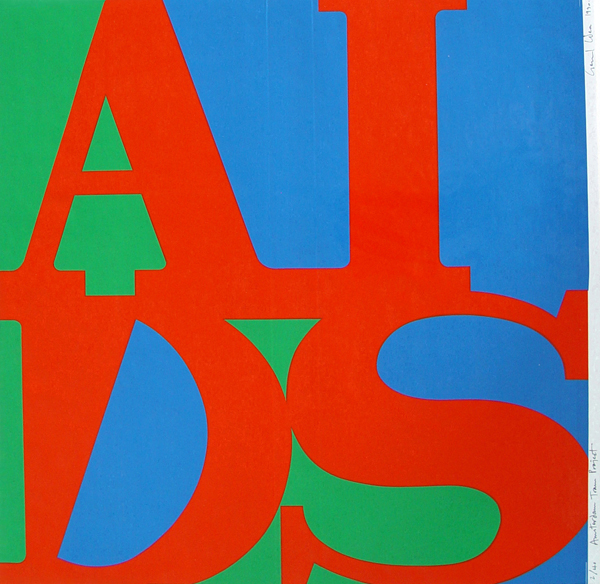 More than three decades ago in 1990 trams in Amsterdam were covered with this very early AIDS silkscreen poster of General Idea. The ‘Amsterdam Tram Project’ became quite controversial, i.e. conductors refused to drive their trams covered with the colourful and marked stickers afraid of giving their support to or at least being compromised and associated with homosexuality. Later on the artists group had other versions produced in larger editions.

In the mid-1980’s, the Canadian art group General Idea – AA Bronson, Felix Partz, and Jorge Zontal – created a symbol using the acronym AIDS, using the letters in a manner that resembled Robert Indiana’s LOVE logo. This witty allusion became part of Imagevirus, a project of paintings, sculptures, videos, posters, wallpapers and exhibitions that investigated the term AIDS as both word and image, using the mechanism of viral transmission. Imagevirus spread like a visual virus, producing an image epidemic in urban spaces from Manhattan to Sydney. It was displayed as, among other things, a Spectacolor sign in Times Square, a sculpture on a street in Hamburg, and a poster in the New York subway system. General Idea felt compelled to make Imagevirus at a time when AIDS was emerging as a global epidemic affecting gay men disproportionately.
Museum Fodor Amsterdam issued the posters in a signed and numbered edition. Beautiful and witty allusion of Robert Indiana’s famous LOVE icon.