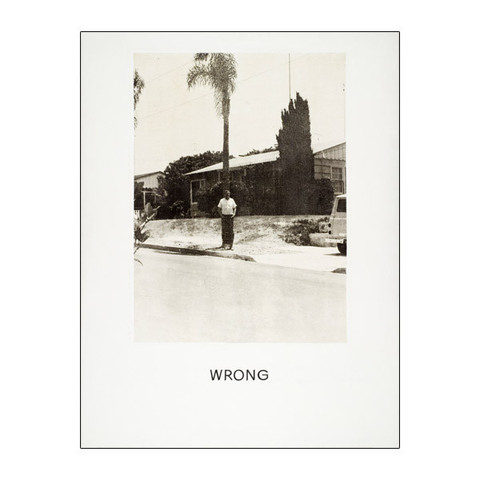 John Baldessari made this print as a painting between 1966 and 1968. He was intentionally questioning the conventions of photographic picture-making, among other things. He created this work after looking at an art instruction book about how to properly compose images. Baldessari had himself photographed in front of a palm tree. He comments: The person that did the book had sketches of the scene, of let’s say a landscape, but there would be two. And one would be right, according to him, and one would be wrong. And I loved the idea that somebody would just say that this is right and this is wrong. So I decided I would have a painting that was wrong, a work of art that was wrong, which seemed right to me.

Baldessari is interested in communicating his concept more than he is in creating something precious or unique. After he decided that his own handwriting was too personal and not distant enough he hired a professional sign painter to letter the word “wrong” you see on the original painting. This poster being just a mere reproduction may ‘as communicating his concept’ therefore be undeniably seen as a work of art, though unsigned.

John Baldessari says about his work: I’m very interested in both language and imagery; I don’t really know why, but I find word and image equally important. He is known for works that blend photographic materials such as film stills and applied discs in colour. He takes them out of their original context and rearranges their form, often outlining their shapes including the addition of words or short sentences.