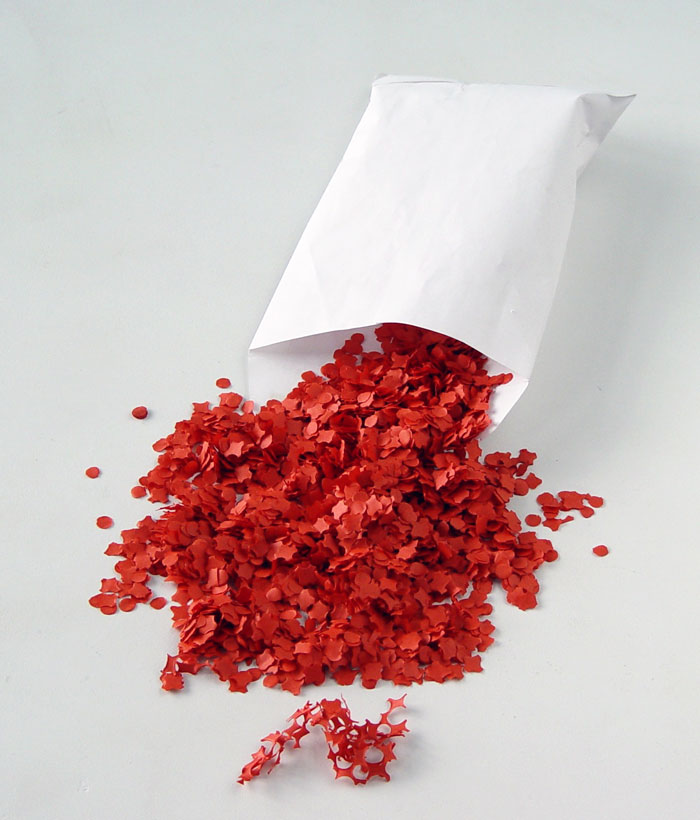 In 2008 Olivier Mosset prepared a solo exhibition in Galerie van Gelder in Amsterdam. Next to several huge monochrome paintings he brought a white envelope. As part of the legacy of George Maciunas the heirs didn’t know what to do with the left-overs of the multiple box Flux Dots By Mosset Total Art Nice. So they gave it to me, he said while handing over the envelope: “I don’t know what to do with it, so I thought I just give it to you. You can do with it what you like.”

Usually George Maciunas only produced a Fluxus box when someone was interested in buying one. So this envelope with confetti originally comes from his stock.

In short this envelope with confetti is neither art nor just a bunch of confetti. These pieces of handmade “Flux dots” (a name Olivier Mosset would never use since he never considered himself to be associated with the Fluxus movement) were once meant to be part of a plastic box series called “Flux Dots By Mosset Total Art Nice”. In the end both artists have touched these particles; for sentimental and also historic reasons this piece could best be named Production Art. 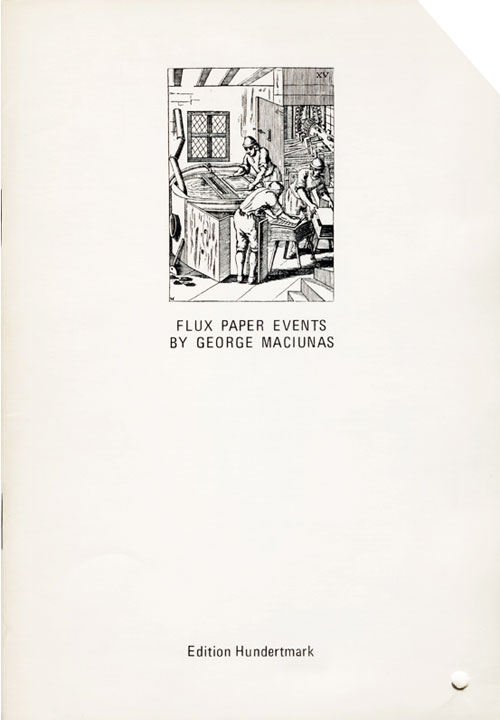 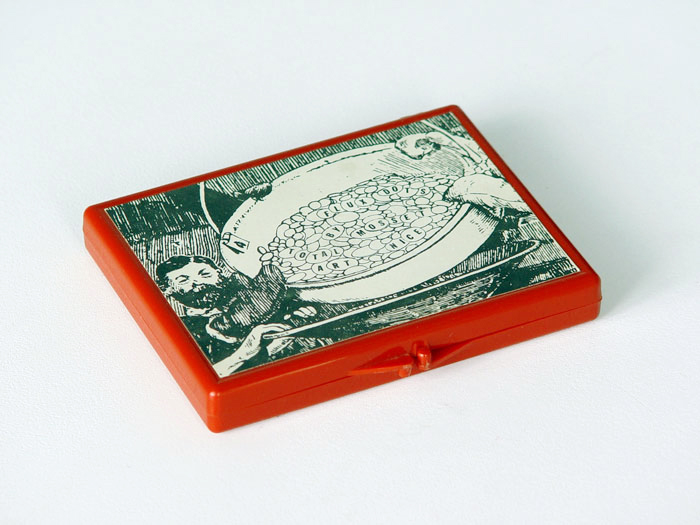 In 1990 Olivier Mosset had his first solo show in Galerie van Gelder. A few days before the opening I presented him a red box ‘Flux Dots by Mosset’.
“Well… looks good!” Olivier commented, “I have heard about it, but this is the first time I see this. I remember that Maciunas once phoned me. He asked whether I was the man of the circle paintings and I said yes, why…?” “Listen he said, you are a Fluxus artist, with all these circles on canvases, you really are!”
“No, I answered, I don’t consider myself a Fluxus artist.”
Maciunas: “Certainly you are and I have an idea. What about making a Fluxus box with punched dots, you know, like confetti?”

In 2008 Olivier Mosset had another solo exhibition in Galerie van Gelder. He arrived with huge white monochrome paintings of 8 meters long flown in from his studio in Tucson, Arizona. Still having his rain coat on he gave me a small thick envelope. “I got this from the heirs of Maciunas”, he said. “I don’t know what to do with it, so I thought I hand it over to you. You may do with it whatever you like.” I looked into the half opened cream colored envelope and saw a heap of hundreds of red confetti, unmistakably the ones Maciunas punched for his Flux Dots box edition.
Ref. Kees van Gelder talking to Olivier Mosset in Galerie van Gelder on 20 March 2008.

Ben Vautier opened a gallery shop BDDT / Ben Doute de Tout in Nice in 1958, which later became well-known as the Around 1960. He started to know the artists of Nouveau Réalisme: Yves Klein, Daniel Spoerri and others. In the autumn 1962, he travelled to London for visiting the Festival of Misfits, where he encountered many Fluxus artists, with whom he subsequently collaborated in various ways. A year later, Vautier organised the Fluxus Festival of Total Art in Nice. 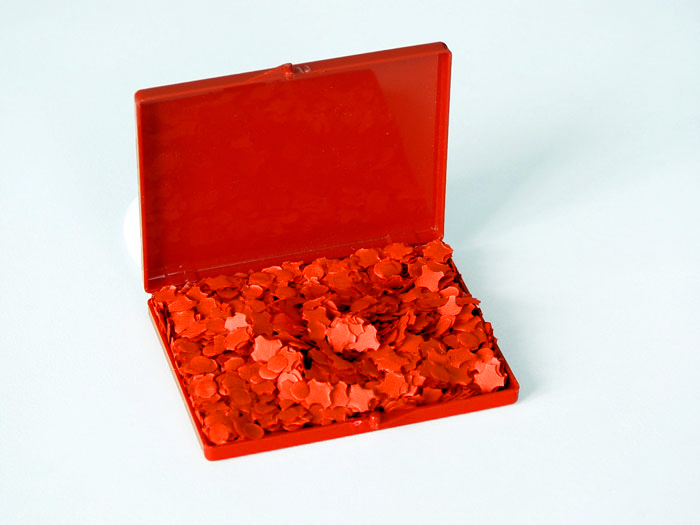 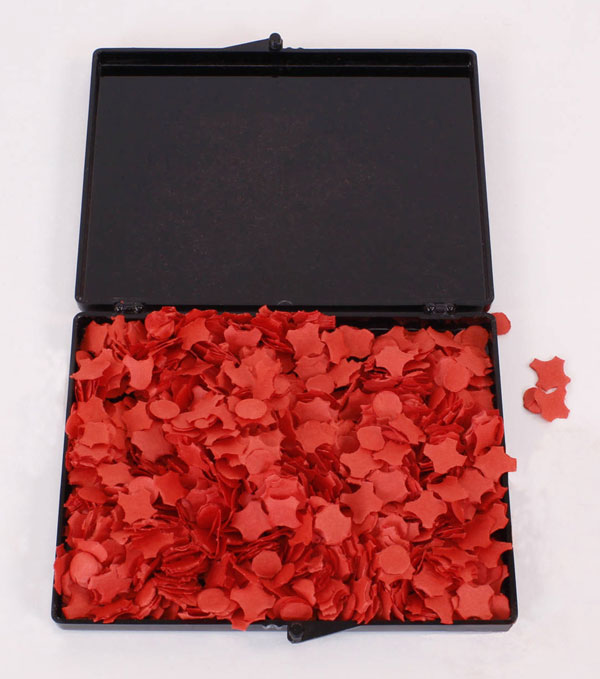 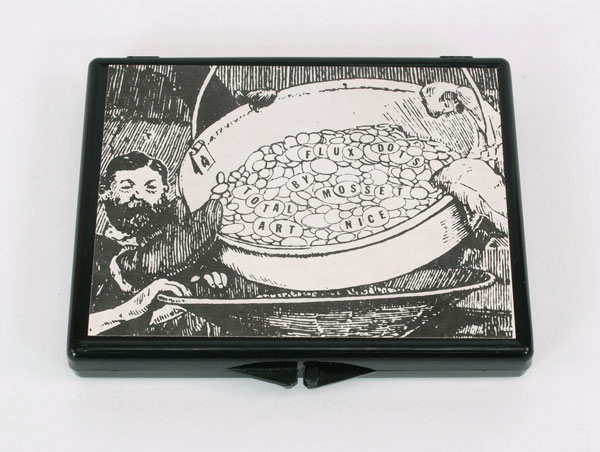 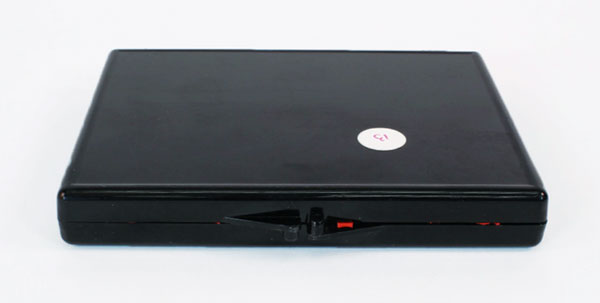 Ref. the Fluxus Digital Collection of the University of Iowa were donated by artist Ken Friedman. 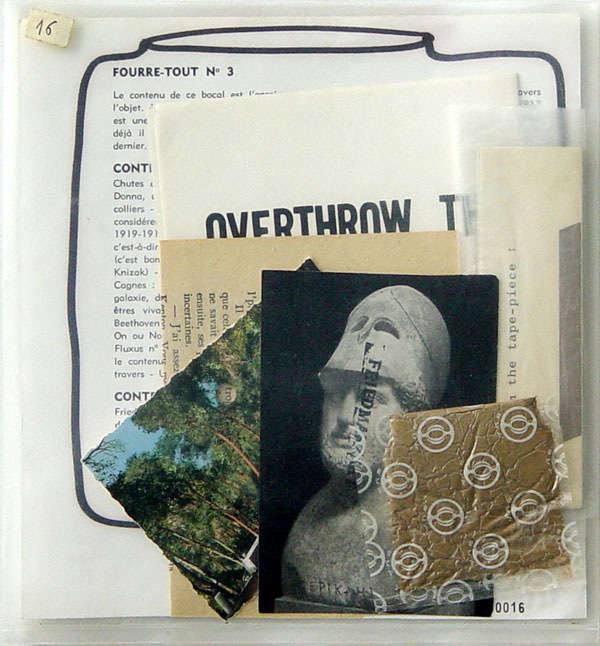 In an accompanying text of this issue it is announced by Ben and Annie (Noël) that “Fourre-tout” number 3 will be the last one. It is explained that ‘The content of this jar is learning us to admit everything. It reads the idea through the object.’
Issues number 1 and 2 were published in 1967 in an edition 250 each. A copy of issue number 3 is in the collection of the MoMA in New York, USA. The museum has one of the 100 glass jars in its collection that accompanies this periodical with an edition of 100 (+ 1 larger ‘jar’ with original manuscripts), although archived separately from its publication. 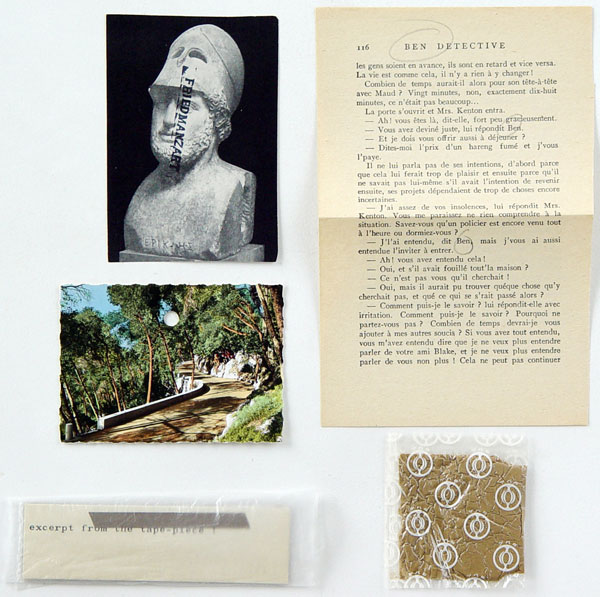 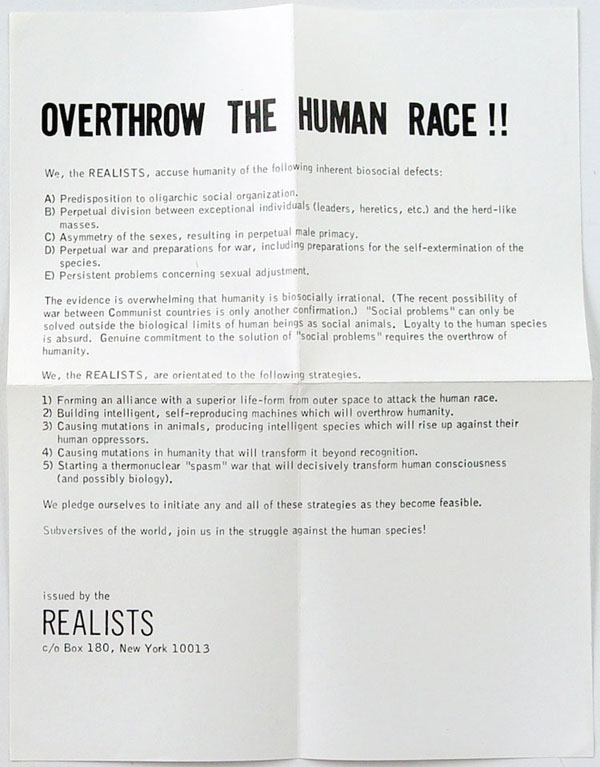 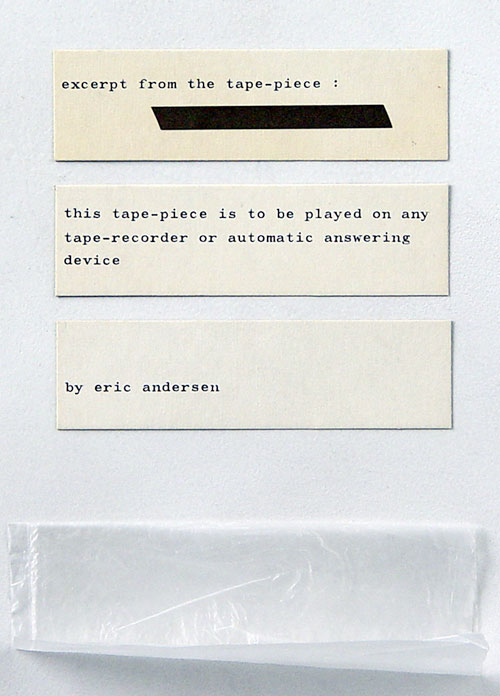 Nota bene: This issue No. 3 is complete, although a glass jar the index is referring to as CONTENU DU BOCAL is lacking. 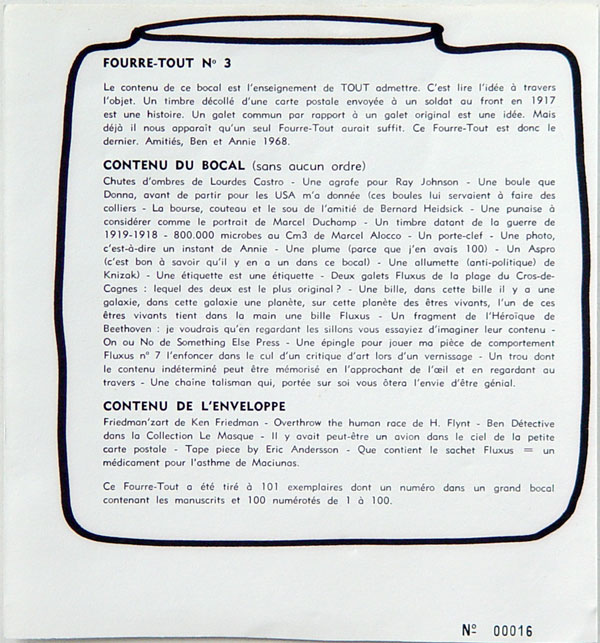 Extra information
Copy edition number 40/100 in the collection of the MoMa, New York. The glass jar with cork that is part of the publication has been archived by the museum separately. 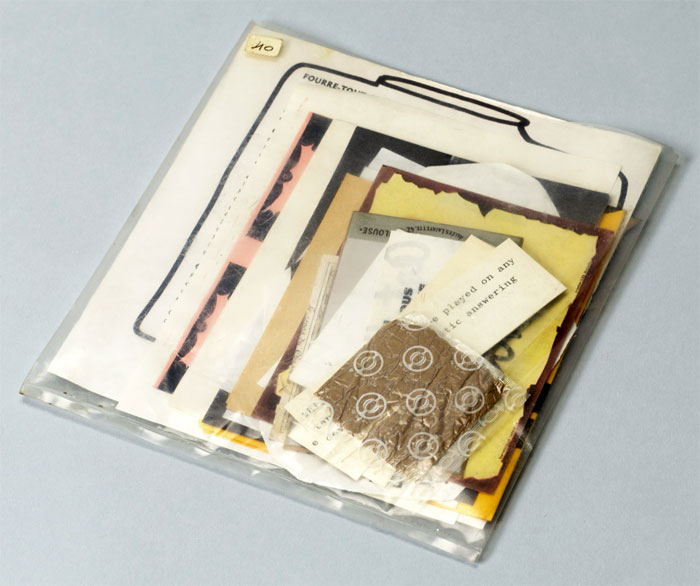 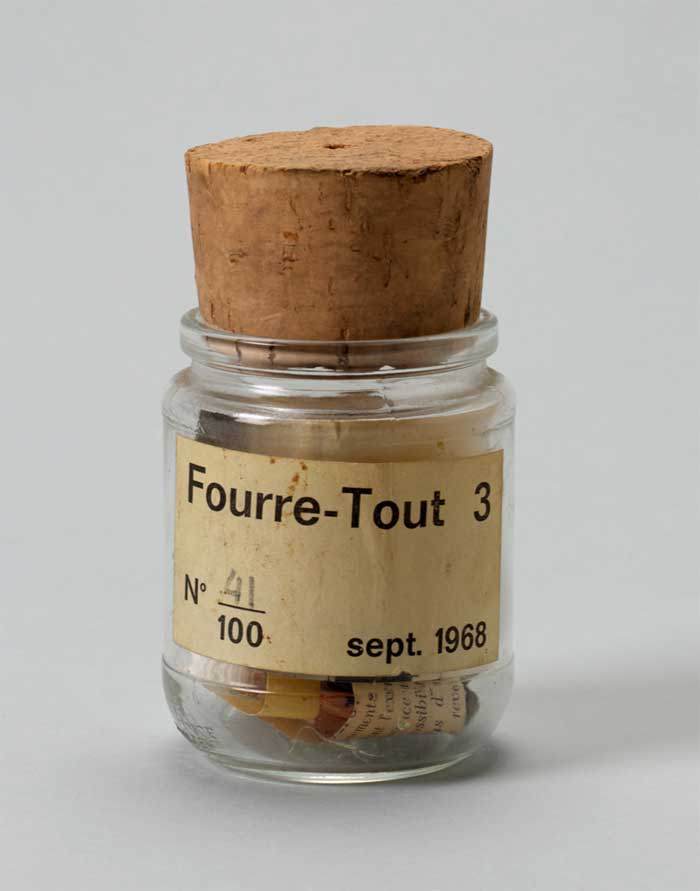