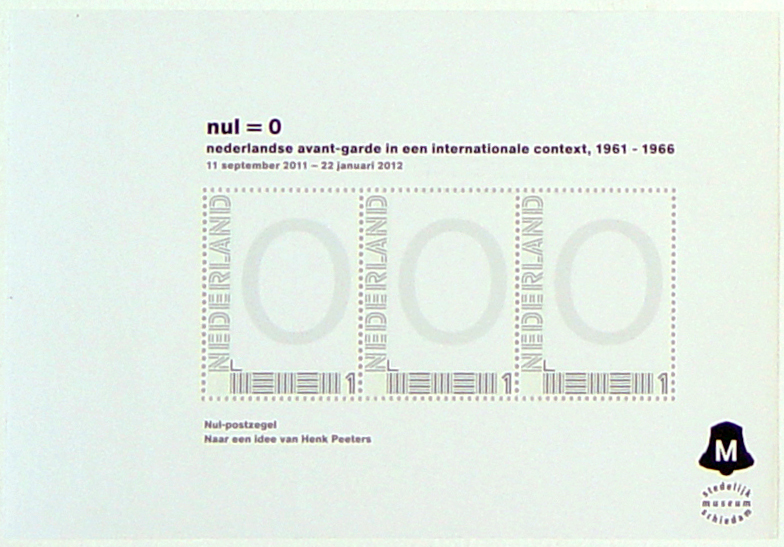 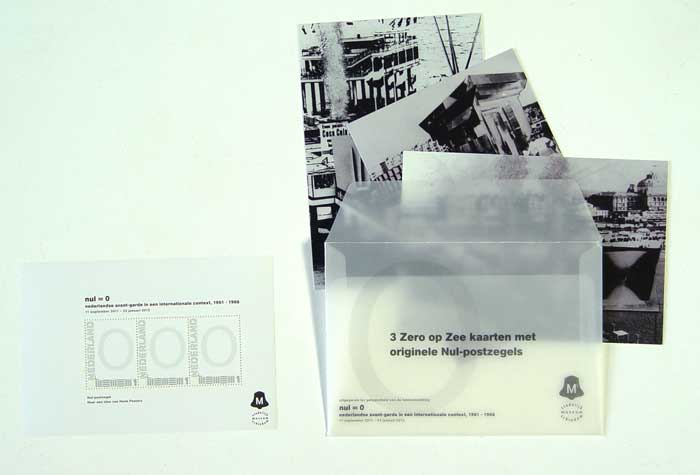 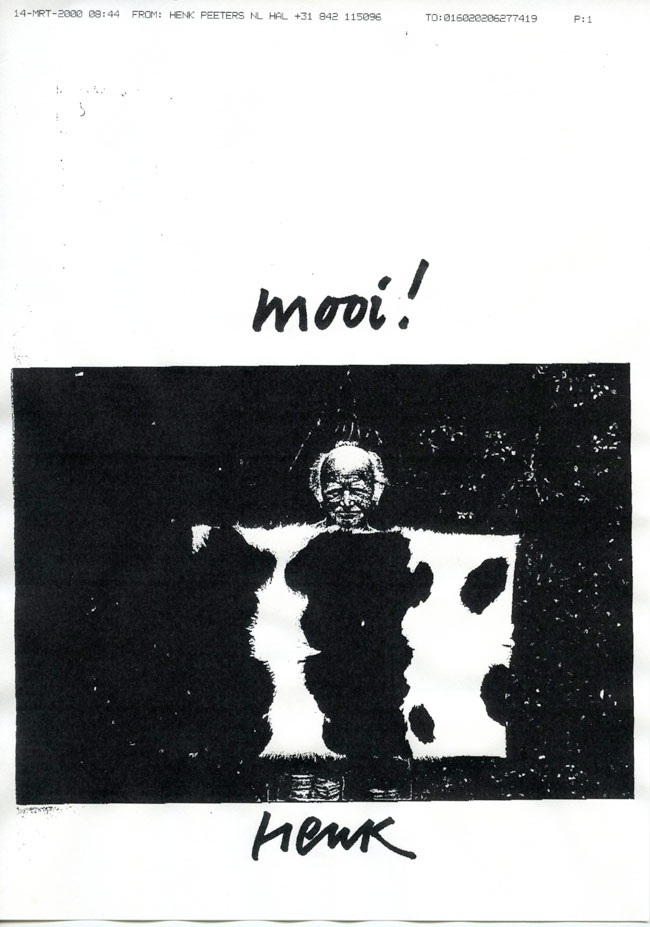 In 2000 Galerie van Gelder invited Henk Peeters for a solo exhibition for which he proposed to cover the gallery space with artificial grass and cow hides on the walls. For that an invitation card was made that he apparently liked and commented with ‘Mooi!’, meaning ‘Beautiful!. 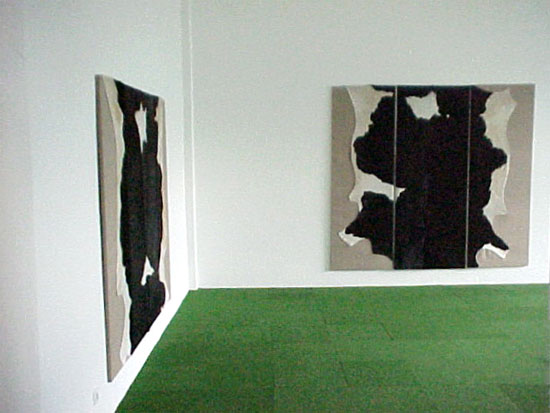 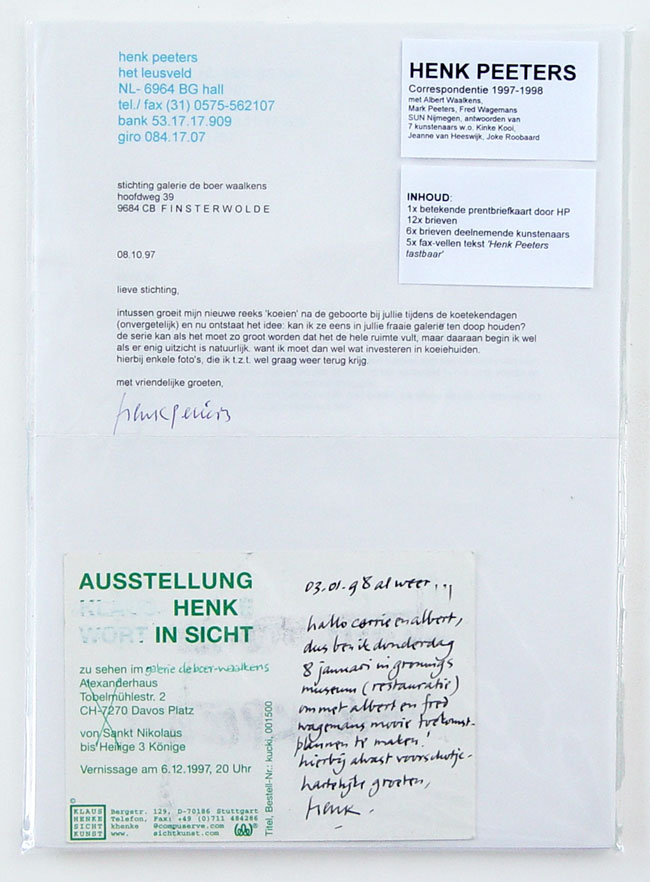 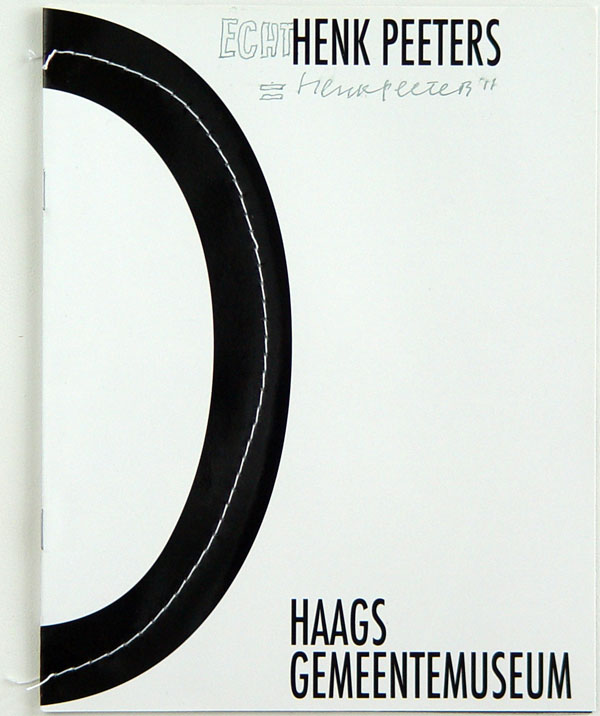 Henk Peeters added the text ‘ECHT =” on 25 catalogues printed in facsimile and signed them. It is a ZERO / Nul catalogus from 1964 of which the pages have been sewn together on a sewing machine. It has a shape of a half circle following the outline of the depicted zero on the cover. Together with the other half on the back of the booklet showing the same outline te action forms a whole zero.
inv.HP 346 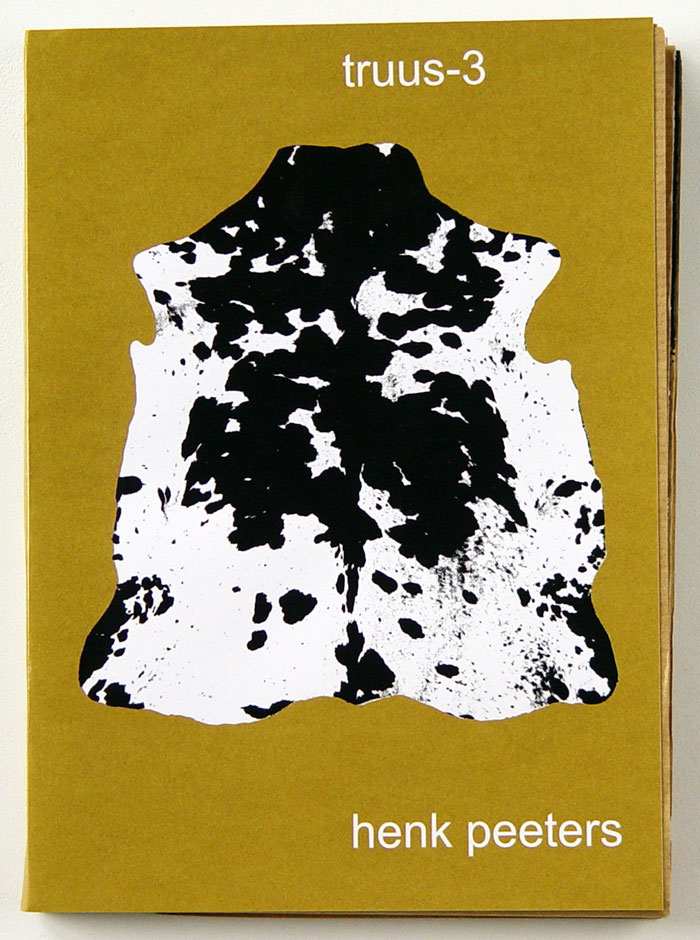 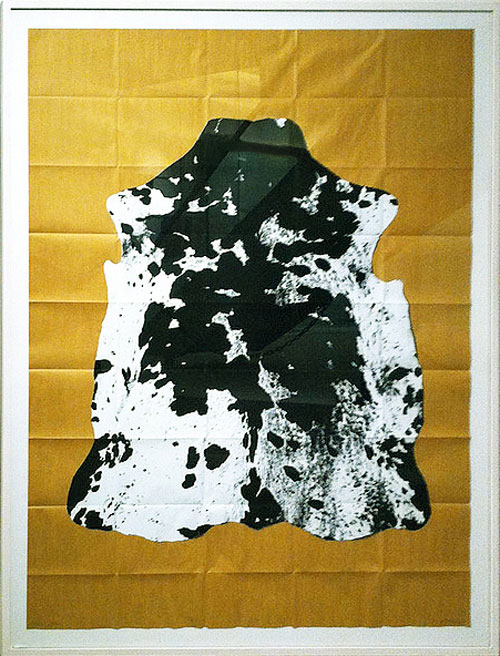 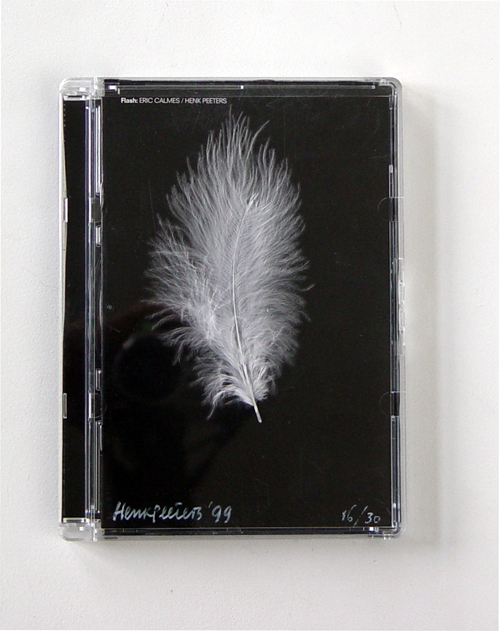 In 1998 Thora Johansen, director of the Bifrons Foundation in Amsterdam, invited Henk Peeters to make a film for her Flash project that found its premiere with nine DVD’s in the Stedelijk Museum in Amsterdam in 1999. Peeters very soon came up with an idea of having a rain of white feathers coming down on a glass plate until this was completely covered with a layer of down. It was filmed in colour with a blue background, added with music of invited composer and guitarist Eric Calmes. For the second request to make also a very short film of one minute Henk Peeters decided to have the film in negative run backwards within the given sixty seconds. 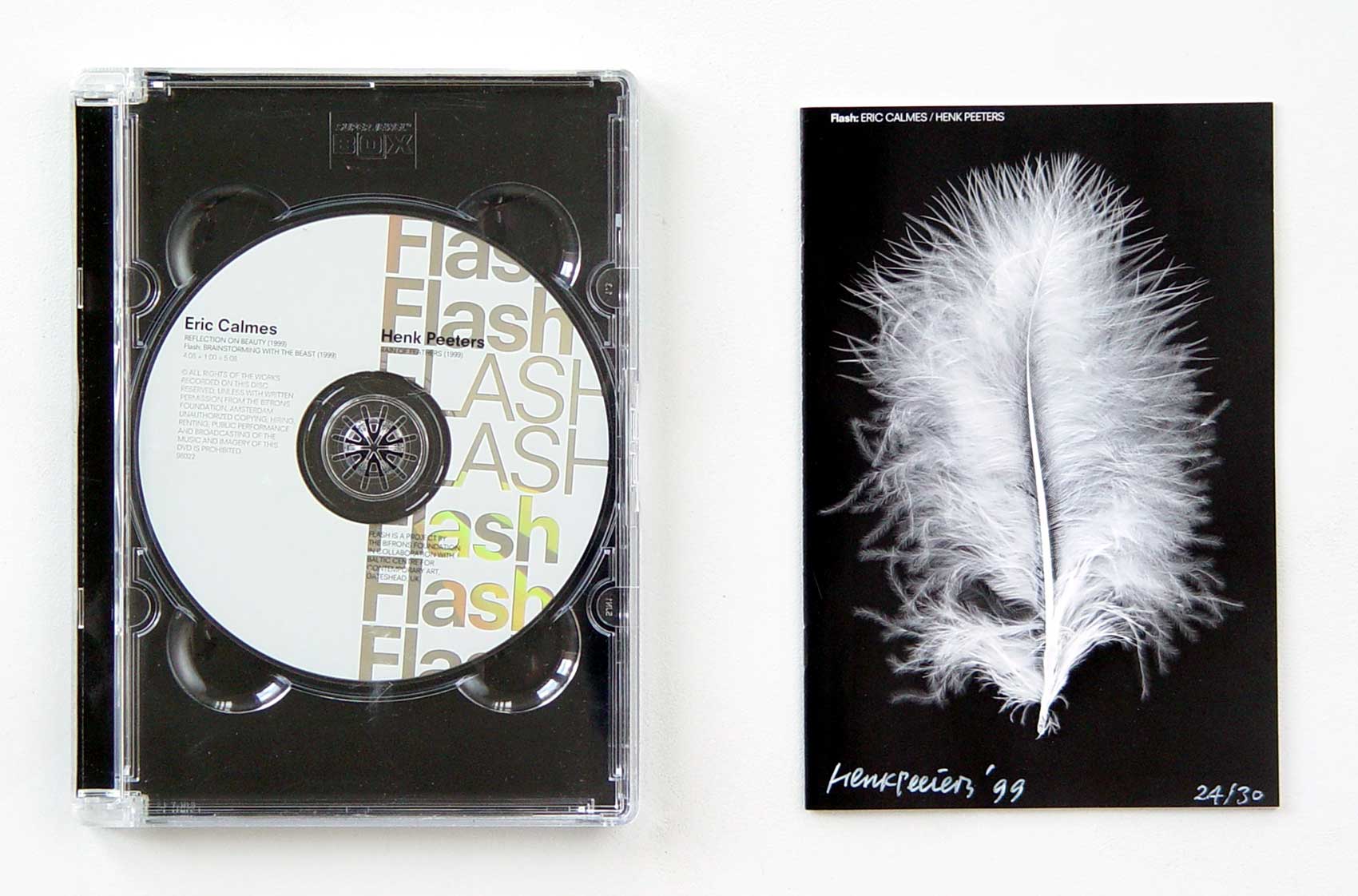 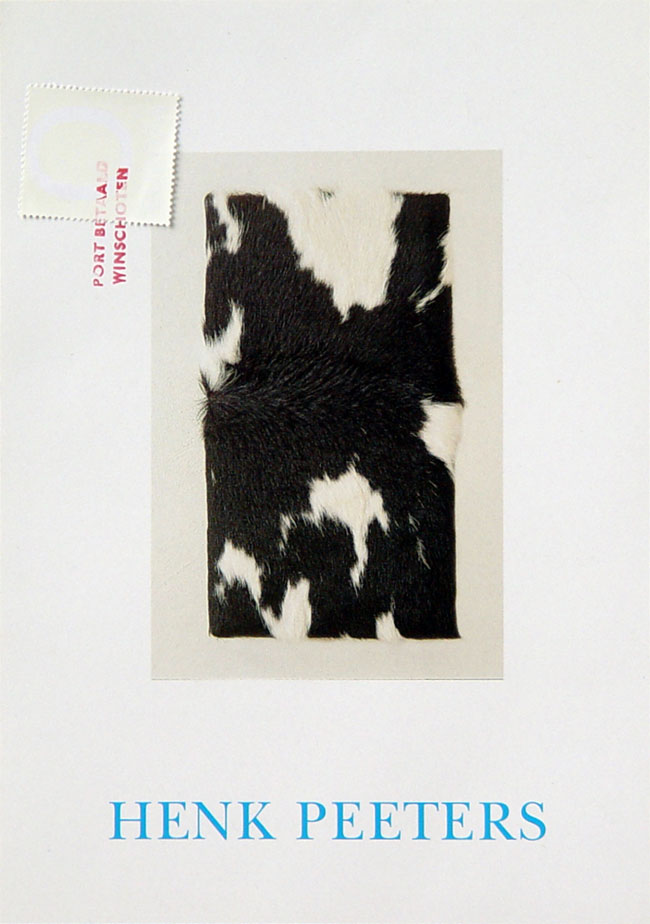 This invitation card of Stichting Galerie de Boer-Waalkens, Finsterwolde in The Netherlands was send by mail. A limited amount of people received the card with a stamp invalidated with a hand stamped text ‘Port betaald Winschoten’. 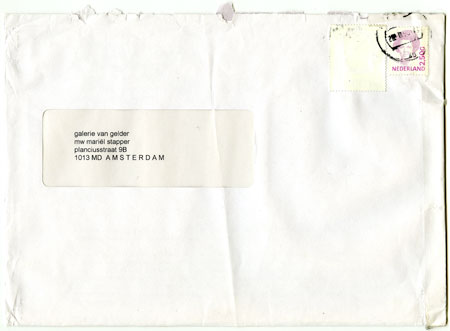 During the opening of “Zero international” in Nice Henk Peeters was thanked by and introduced to mayor Jean-Marie Le Pen. He refused to shake hands with the French leader of the National Front party. 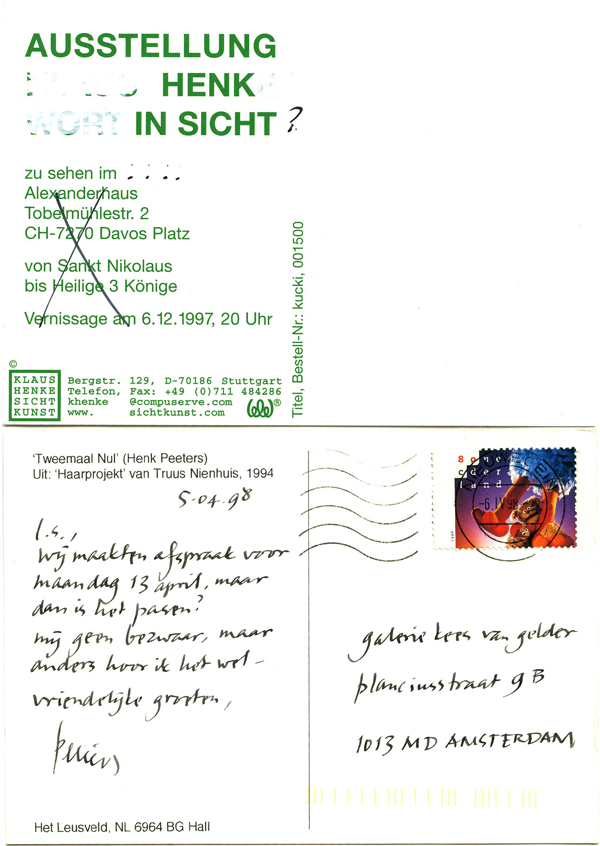 This work is unique and could be considered as a bagatelle. The handwritten text about a meeting for a coming exhibition and an altered invitation card shows the spirit and humor of Henk Peeters.