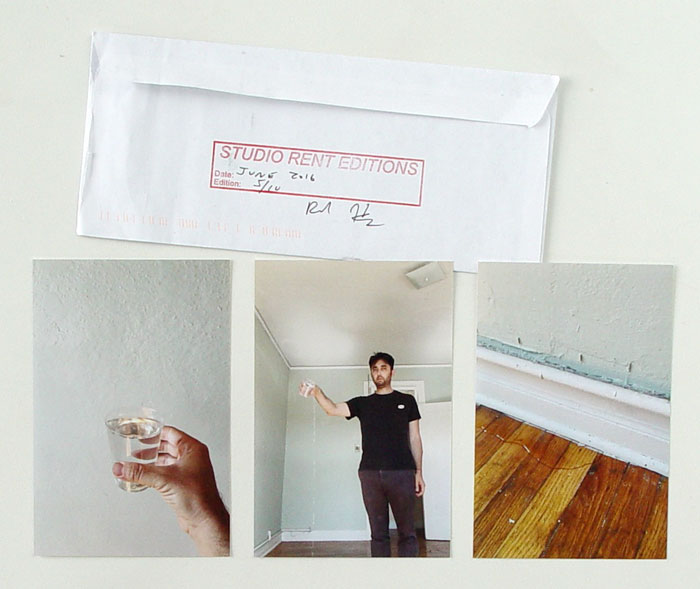 The following Studio Rent Editions have been published by David Horvitz.

I made polaroids of the sea in Palos Verdes, California. September 2010.

I bought one of each apple variety at a farm stand in Upstate New York on one day in the fall. October 2010.

I put a wreath over my head and wrapped my body with Christmas lights. December 2010.

I went to find the road to nowhere, a remnant of an abandoned project by Robert Moses in the Far Rockaways in Queens, New York. February 2011.

I made two polaroids of the sky exactly one minute apart. March 2011.

I traveled from the UK to Holland on a ferry crossing the North Sea and made a polaroid of a view from the ferry. April 2011.

I went to Marcel Duchamp’s grave in Rouen, France and touched his tombstone. May 2011.

I bought a watermelon from a street vendor in Brooklyn and took it to Coney Island so it could see the sea before I ate it. June 2011.

I brought a manenki neko with me to Arles, France hoping to give it to Chris Marker. July 2011.

I stole a flower from a restaurant and tried to teach myself how to draw by drawing it. September 2011.

I left a bouquet of white roses at Occupy Wall Street. October 2011.

I mailed one-cent checks to Sallie May to contribute towards my student debt. November 2011.

I took LSD and watched the sunset at JFK airport. December 2011.

I found one of my Public Access images in a fan video made for New Order’s “Leave Me Alone” on Youtube. January 2012.

I went stargazing in the streets of Brooklyn. February 2012.

I searched for the Aurora Borealis in Whitehorse, Yukon. March 2012.

Reject prints for my “Scotch Broom” edition with Fillip. April 2012.

In Lake Tahoe, Nevada I walked from a public beach to a private beach. May 2012.

In Hong Kong I got stuck on a rock at the bottom of a cliff, and was saved by a police boat after signaling to passing boats with my camera’s flash. June 2012.

An envelope of California sand. July 2012.

I spent an entire day walking in the direction of the sun, ending up somewhere in New Jersey at sunset. August 2012.

I made street signs of keywords for stock photographs depicting depression and placed them around the Catskills Mountains. September 2012.

I collected seeds from the Honey Locust trees in Zuccotti Park in the Occupy Wall Street encampment. October 2012.

I photographed items in Printed Matter’s archive that were destroyed by the super-storm Sandy. November 2012.

I tried to walk across the horizon in Berlin. December 2012.

I buried the paper studio rent edition certificate in a pile of dirt for the month. March 2013.

I inserted scanned polaroids of my cat, Demian, into bootleg PDFs of “Marcel Duchamp: The Afternoon Interviews” by Calvin Tomkins published by Badlands Unlimited and “24/7 Late Capitalism and the Ends of Sleep” by Jonathan Crary published by Verso, and then put these PDFs into circulation. August 2013.

I filled my shoes with sand at the beach before getting on a flight at LAX. When I took my shoes off in airport security I made a small pile of sand. September 2013.

Where I planted a Honey Locust tree (that had been germinated inside a book) outside Bard’s CCS library, small rocks were excavated and mailed. November 2013.

I wrote an angry letter to two curators and I mailed it with the shavings of a bronze bell. January 2014.

I waved goodbye to my friends in Berlin from Brighton Beach, New York (they were sleeping when I left their house to go to the airport, so I could not say goodbye in person). February 2014.

I made photographs of Edgardo Antonio Vigo’s work in MoMA library. March 2014.

In a hotel room in Limerick, Ireland I wrote with watercolor on the backs of envelopes forming a long sentence. I mailed out individual envelopes, fragments of the whole sentence. I don’t remember what the sentence said. April 2014.

I collected small pieces of sea glass that were used for sculptures in the New Museum and mailed them. May 2014.

In the Catskills my baby daughter laid on the ground and was surrounded by a handful of Wisteria seeds I had collected from the Brooklyn Botanical Garden. I left them there to grow in a circle. July 2015.

I drove up the California coast and secretly placed my artist book, Public Access, in small local libraries. August 2015.

I made a rubber stamp: “A Distance Between Two Moments in Time,” and stamped post-cards. September 2015.

I held a book launch for my Mood Disorder book at the New York Art Book Fair by attaching it to balloons and releasing it. October 2015.

I made watercolor sketches of vases over a press release in Tepoztlan, Mexico. November 2015.

Three Pellegrino bottles filled with sea water collected from the longitude line that divides California’s time-zone with Alaska’s time-zone were carried along the Ballona Creek to Blum & Poe gallery. They were left on the cement of the river, in a row north to south. December 2015.

I moved to Los Angeles and made post-cards for each letter of “Los Angeles” and mailed these letters out individually. January 2016.

I stamped “Nobody Owns the Beach” onto two envelopes and mailed them separately. February 2016.

I mailed a rock from Death Valley in an unpadded envelope. April 2016.

I poured a cup of tap water onto the wood floor of my new studio in Los Angeles and let it evaporate and/or seep into the wood. June 2016.